skip to main | skip to sidebar

The question about how to reuse Talend jobs is always in the forums. I will demonstrate here with a proof of concept how this can be achieved using lightweight JSON HTTP requests.

You can find the source code in here.

If you prefer not to hack into the code then just keep on reading for an explanation.

Build a job (retrieve_stock) like the below which basically uses a Yahoo API to retrieve data about a security symbol: 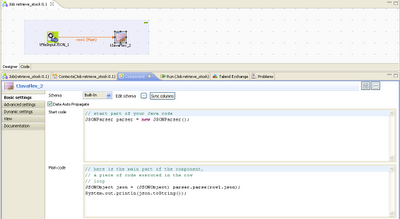 The job uses a tFileInputJson:

As you already noticed you need to declare a context with two variables like below (showing default values):

All we are doing is getting the json from the remote URL (built out of context parameters) and returning it to the stdout. The URL will remain fixed in this example but I use a context variable to show it could change in the future.

Export the job as "Autonomous", uncompress the zip and run the wrapper shell/batch. I am working on Windows this time so we will need to modify the batch file adding @ECHO ON at the beginning of the file.

Here is a typical response

This job is supposed to be reused from others. If at any time the way the symbol is retrieved changes we will change the logic from just one place. After that we just need to export retrieve_stock job and deploy it in our server.

We could reuse retrieve_stock job using a tSystem component to invoke the command but I am going to go a step forward and propose something else.

It is well known that java will use fork() to invoke an external command which means the whole JVM heap memory will be duplicated when the process run. This is of course not efficient. I have posted a solution around this issue before.

So the proposal here is to run a local server that executes local talend command line scripts. The output will be JSON. As you have already figured I am advocating here to use JSON as a lightweight data structure that can be used to maintain the communication channel between different jobs.

Using a nodejs server is better than using Jetty or any other java container for just running shell commands. In my tests the memory footprint for nodejs is really low and the performance is similar to a java container.

After you setup your server you should get the same response after hitting a url like the below:

What happens if the amount of data generated by one job is too big? Well in that case I recommend to use a shared resource like a file or a DB (or both like the case of sqlite ;-) If a job works generating a file or DB tables of course the interface will need to be documented and still you can invoke it via a REST call like we have explained here returning back to the caller (Parent job) the results of its execution.

The job we will use to invoke retrieve_stock actually uses the same pattern as you see below: 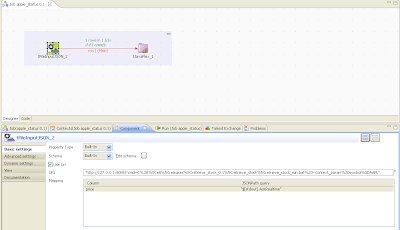 You will be able to hit a url like the below and your job will return the AAPL price:

As you can see at the end a job will call external jobs using the same JSON response strategy.

I am not including any transformations in these examples because the whole purpose of this post is to discuss alternatives when it comes to inter-job communication in Talend. Here is what this architecture is allowing me to do:

You are working with shell commands which can be pretty destructive if you do not ensure the json server just run locally attached to a loopback IP (in our case 127.0.0.1). You will need a more robust server implementation if you violate that rule or if you cannot guarantee your server will not be hosting any other service where a different user could run malicious code.

In case you did not notice the below two lines are equivalent. The second is URL encoded. We need that to pass the whole command as a parameter from a query string or a POST request.

Posted by Nestor Urquiza at 9:39 AM